History abounds in the City of Brotherly Love—and Reinhold Residential offers architecturally unique apartments in Philadelphia that embrace the city’s rich past all while offering residents a touch of luxury.

The Best of Old and New Philadelphia 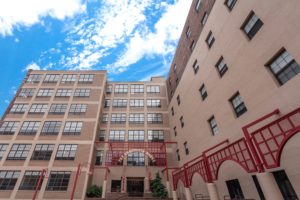 Exposed timbered beams and expansive windows are just a few of the features that help our apartments retain their original charm, which are given a modern touch with state-of-the-art features and upgraded community amenities.

That fusion of old and new extends beyond our walls, as our historic apartments in Philadelphia are situated near some of the city’s most treasured landmarks, while also being just steps from the region’s most forward-thinking, innovative attractions. 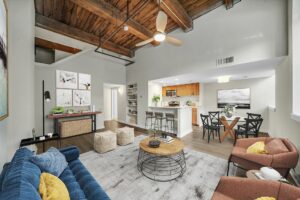 History and modernity coexist beautifully at The Chocolate Works apartments. Situated in Old City, the anchor of Philadelphia’s historic district, these luxury rentals were home to a once former chocolate factory. The apartment building retains its historic charm and character, with exposed steel framing in the courtyard and industrial-chic décor harkening back to its roots. High-lofted ceilings and oversized windows will have you envisioning what life was like in this building a century ago. 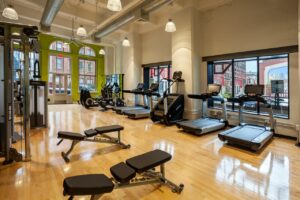 Steps Away from History and Fun

The Chocolate Works is just blocks away from some of the nation’s oldest and most iconic landmarks: the Liberty Bell, Betsy Ross House, Independence Hall. Tour the original parks Ben Franklin laid out for the city, including nearby Washington Square and Franklin Square, which has been transformed into a bustling urban oasis, complete with mini-golf, a carousel, seasonal events, and plenty of green space for exercising.

The community is close to Penn’s Landing and the Delaware River waterfront, home to Spruce Street Harbor Park, named one of the nation’s best seasonal parks. To get the full experience of the neighborhood’s importance, visit museums like the National Constitution Center and the Museum of the American Revolution, where you can see firsthand the people, places, and events that helped shape Philadelphia and American history. And when you need a night out, some of the city’s best bars and restaurants are located in the lively neighborhoods of Northern Liberties and Fishtown, which are just a few minutes away.

Finding modern apartments for rent in Philadelphia’s most historic neighborhood that preserve the city’s rich history is easy with Reinhold Residential. The Chocolate Works brings history to life, both on-site and in the community, while also putting residents right near the city’s leading cultural attractions and giving them the modern luxuries they deserve. Contact our leasing office today to find out more about our historic apartment buildings in Philadelphia and to schedule a tour.